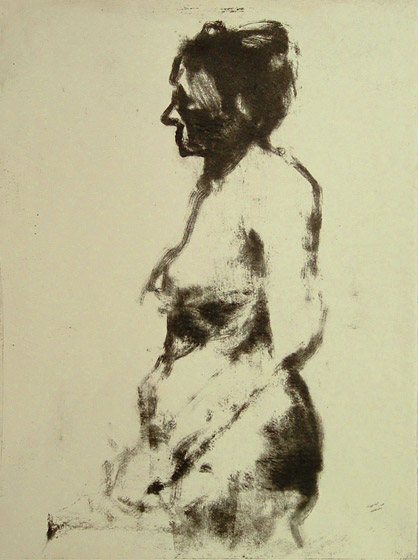 Homage to All Models

ed from Taha Neyestani on Vimeo.

Email ThisBlogThis!Share to TwitterShare to FacebookShare to Pinterest
Labels: Models 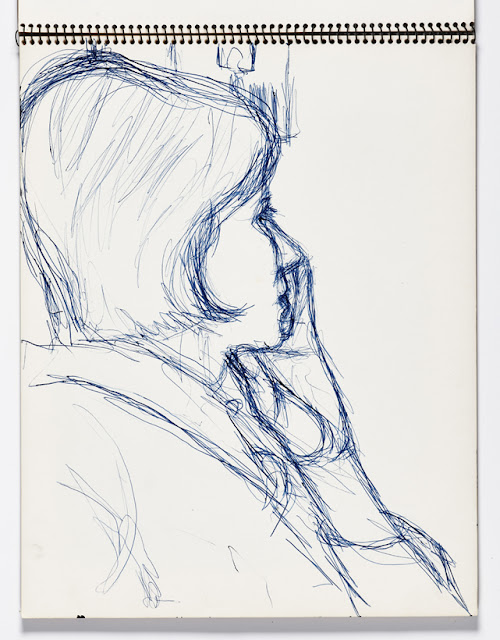 Stanford University has launched an interactive website containing all of the sketchbooks of Richard Diebenkorn, 1922-1993. Click the drawing above to visit the site.

Searching: The Art of the Gesture

Peruse the yellow pages for medical doctors and you quickly find a host of experts on particular parts of the human body. There are doctors for the feet, doctors for the heart, specialists who focus on the brain, others who study the nervous system. There are blood doctors, bone doctors, skin doctors, eye doctors, and so on. When we begin to draw the human figure we often find ourselves like the above specialists, scrutinizing the parts of the body in isolation without seeing their relationship to the larger picture.

The first and most important task in beginning to draw the figure well is learning to respond to the impact of the whole figure, or what has come to be called "the gesture." Gesture drawing is not a technique, it's a shift in attitude. Daniel Mendelowitz, in his influential book, A Guide to Drawing, characterizes the practice of gesture drawing, quite simply, as a search. When we are in a searching frame of mind we are open to what we might find, having no concept of what that will be before we start. Consequently we adopt a looser, more free-ranging mark. Gesture drawing is like asking a lot of questions and leaving the question marks on the page. Each line we draw compounds with other lines and assists us as we calibrate our movements toward a final resolution. 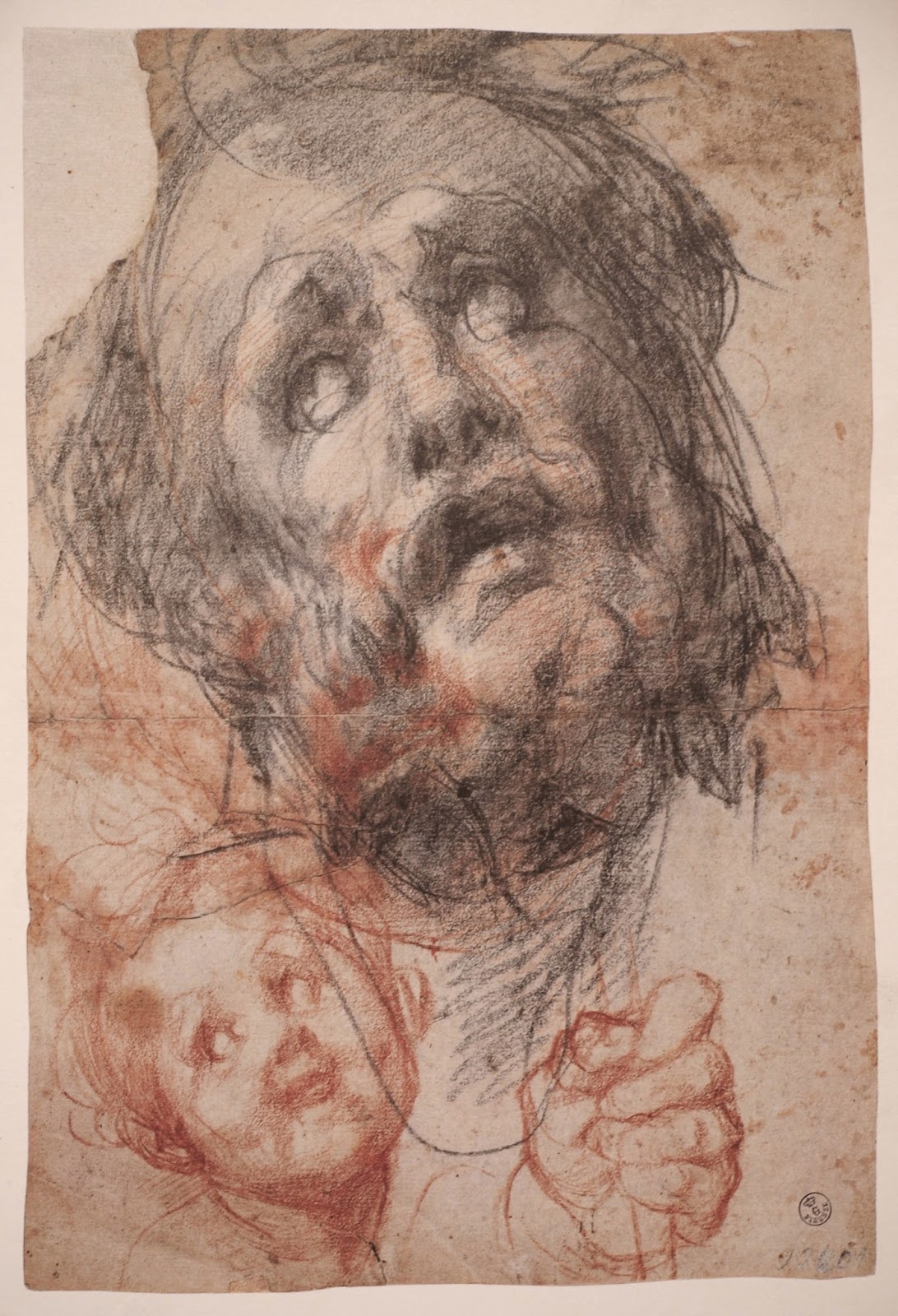 Looking at great master drawings such as those of Jacopo Pontormo (above) reveals how a searching attitude plays out in a drawing. Like most of the old masters, Pontormo's drawings were not intended for public display but were rather like soliloquies. He was simply trying to get clear about the truth of his subject and to render it up in a way that would not just record the appearance of external features but  capture a living, breathing, animated being. His drawings are full of inefficiencies - lines that are drawn and later abandoned or supplanted with newer, ever more concise and astute lines. The resulting miracle is that all of these lines, the first and the last, all become necessary to the final statement. Beginners' figure drawings by contrast often start by fixing a concrete detail, an anchor point, usually the head, and moving off from this station to enumerate the many parts in a top to bottom and back again sequence. The casualty of this sort of approach is the sense of life. Like Dr. Frankenstein's monster, this sort of drawing is more like a stitched together corpse than a living thing.

In gestural figure drawing the visible surface of the body is not the primary resource. As Nathan Goldstein, another great teacher, states, we're not drawing what the figure looks like, but what it's doing. In a sense, we are making a drawing out of verbs, not nouns. Before an arm becomes an anatomically believable thing, it is, fundamentally, a direction. The same with the torso, the head and neck, the legs, and all of the myriad parts of the human form. What does it profit us if we succeed in creating a smooth, detailed anatomical resemblance of the body's parts but fail to see their basic directions? We lose the vital sense of movement of the living body in favor of a cold kind of reportage. 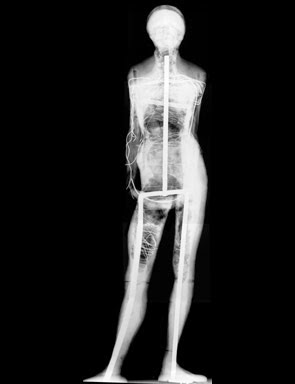 So, if the outer appearance of the body is not the primary resource for the gestural search, what is? If we look at this x-ray of Degas' sculptures we can clearly see the wire armatures that form the structural underpinning of the outer forms. The armature is the axis that establishes the fundamental direction of the form, as well as its basic proportion. Proportion is simply what we might call the scale, or relative size, of one part to another. A third fundamental fact that the armature establishes is simply where things are in relation to other things, or their essential spatial location. In a nutshell, a gestural drawing is all about these three fundamentals: location, scale, and direction. In the limited time frame of the typical drawing class exercise, often less than a minute, there's little time to deal with anything more than that. The surprising thing is, that's enough to capture a very powerful evocation of the essential spirit of the pose. The mind of the viewer supplies the rest. 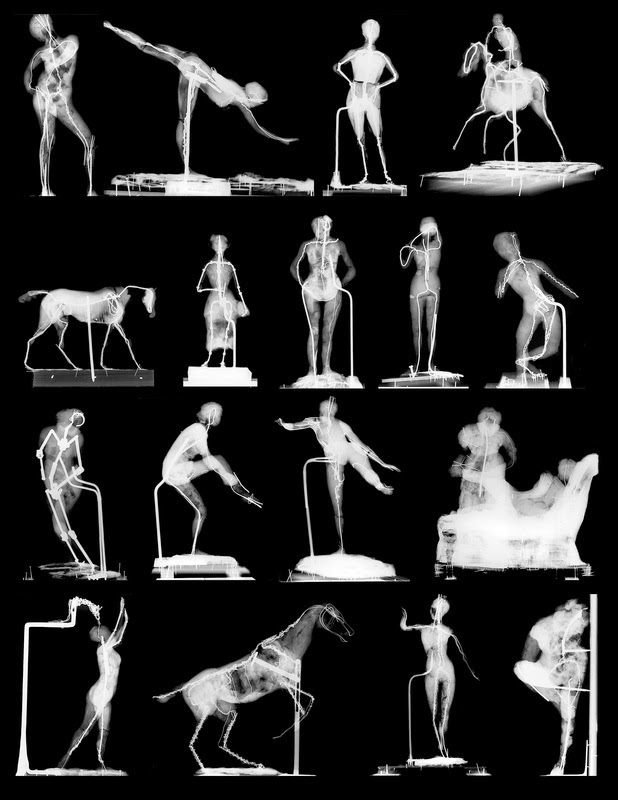 In gestural drawing we don't just draw quick contours, we make lines that re-enact the directions of body's forms as seen from our particular viewpoint. These fluid lines are the two-dimensional equivalents of the sculptor's armatures. Our drawn lines, as we see in Pontormo, allow us to test our initial assumptions about the direction and close the gap between our first reactions and the actual visual state of the form before us. And although it's important to learn to respond quickly and intuitively, if we ever find ourselves unsure what the direction is, we can always fall back on the old objectifying trick of holding up our pencil to the model and transfer the observed angle to the page. 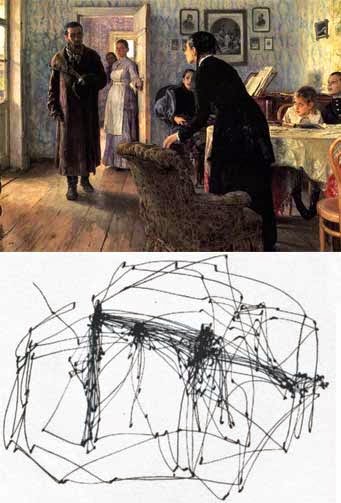 Another important resource in gestural drawing is the action of the eye itself as it confronts the forms of the body. The eye tends to follow along the long axis of any form, as these famous eye-movement studies by Alfred Yarbus demonstrate. When our hand is engaged with our eye the lines we draw materialize these basic movements on the page and a crude but compelling resemblance to the reality of the model begins to build. 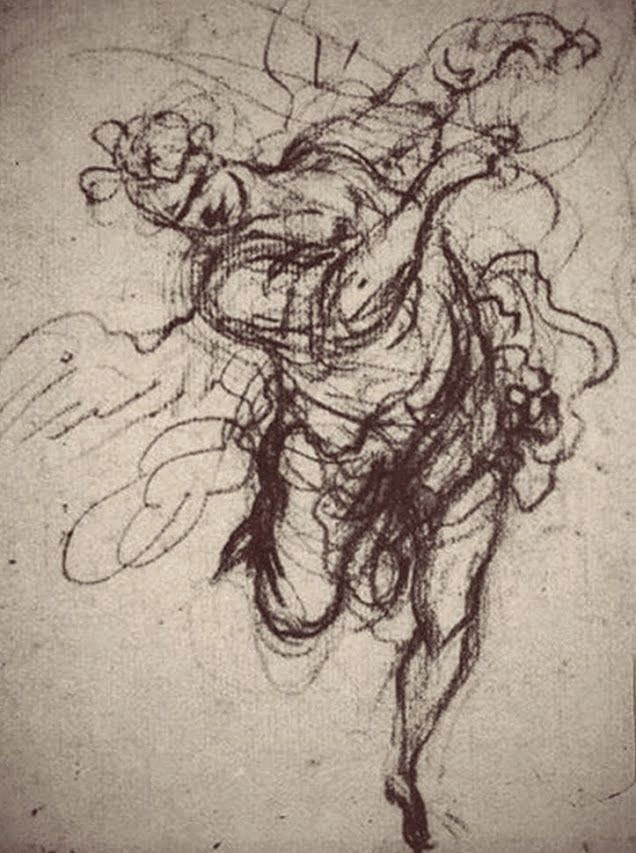 In this little study by Pontormo you can almost sense the artist's hand following the dance of his eyes as it travels over the figure. The lines are, in a powerful way, the visible traces of those movements. You can see how, like Yarbus' studies, Pontormo returns to certain key points of interest, reinforcing and emphasizing them to the point that they become rhythmic moments in the larger composition of the whole.

In summary, a good gesture drawing is all about asking incisive questions, searching for the answers, and leaving traces of our path to discovery. The three most important questions we can ask are: where are the parts, relative to each other (location), how big or small are they (scale), and finally, what direction are they going. With these questions in mind, and putting pencil to paper, we're no longer held to just following contours and edges. We can travel through the axis of the form, note relative positions of articulating joints, and circulate freely and repeatedly over the whole body, leaving tracks of our growing grasp of the interrelationship of all parts of the figure into a single, magnificent whole.

For inspiration, check out this album of great gestural studies from Michelangelo to the present. 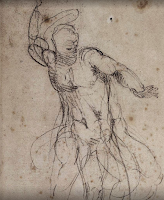 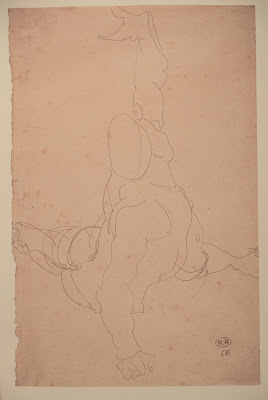 Beginning drawing students are often baffled and disheartened by an exercise that has become a canon in art training. I'm talking about the so-called "blind contour" drawing. Pencil to the page and eyes on the model, a line is pulled without watching the pencil. The exercise is unparalleled as a way to begin to develop eye-hand coordination. The more typical sewing machine stitching and symbolizing that typifies beginners' sketching begins to yield to confident, seismographically sensitive lines full of particular information about the subject's actual form. The sculptor Rodin certainly practiced blind drawing routinely as his many studies from the moving model attest. But earlier than Rodin by almost four hundred years another great artist practiced the blind drawing, perhaps not so much from choice but by necessity.

In 1976, numerous large charcoal drawings by Michelangelo were found on the plaster walls of a crypt beneath the New Sacristy in the Medici Chapel in Florence's church of San Lorenzo. Michelangelo, who had grown up in the Medici household virtually as an adopted son, fell out with the Medici after they were ousted from the city in 1520. Flipping his allegiance, Michelangelo designed battlements to protect the city from their return for which he paid by having a bounty placed on his head when they returned to power. Michelangelo hid out in the crypt for about six weeks during which time he occupied his time by drawing in the darkness. In his own words, Michelangelo writes of the conditions:

"I hid in a tiny cell," he wrote, "entombed like the dead Medici above, though hiding from a live one. To forget my fears, I fill the walls with drawings."

Not seeing what he was doing was clearly no impediment to the great master. The lines are as fluid and informed as his life studies. Check out the drawings on the links below.


Michelangelo drawings in the New Sacristy of the Medici Chapel

New lease of life for Michelangelo's secret drawings, The Guardian 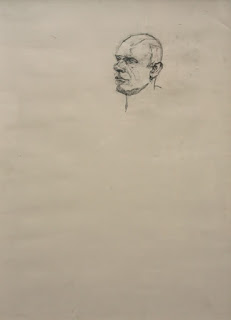 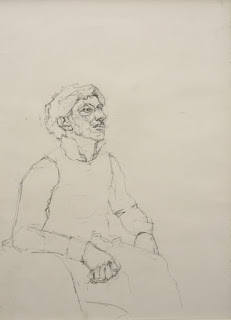 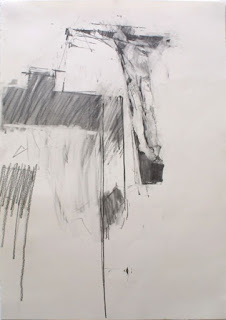 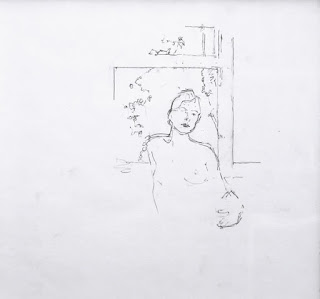 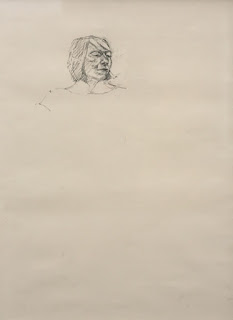 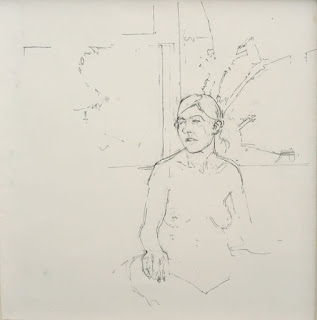 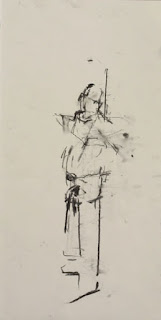 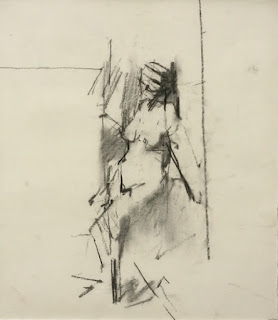 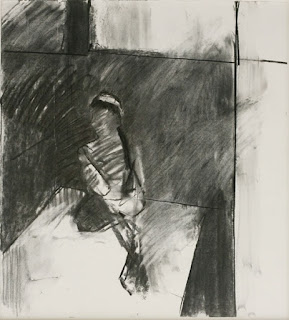 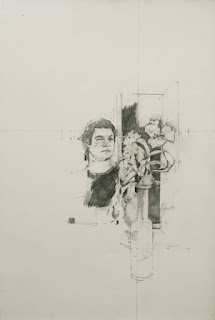 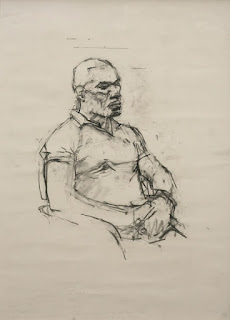 More at Alex Fowler's website.
Posted by Frank Hobbs at 2:05 PM No comments:

"The Hand Is An Interpreter, Not a Copyist..." 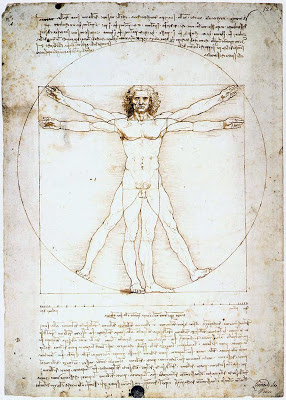 To launch the new semester:
“There is a freemasonry... among figurative painters – and I mean the term in the metaphoric sense of a secret club as well as the sense of a guild of highly developed craftsmen, for great skill is required to observe and render the body. And it is both, observation as well as drafting. Over a lifetime of close watching one learns how muscles move and pull and place our bones into postures, and the ways that our bodies and faces can reveal our thoughts; the long, slow, laborious practice of making marks to represent what one sees isn’t as direct as the same thing might be if one takes a photograph, the mark-making also conveys what one senses and feels. The hand is an interpreter, not a copyist…”


(from a review of the exhibition, The Figure in Contemporary Art, Cypress College, curated by Thomas Butler, by Geoff Tuck on the blog Notes on Looking.) Click on the link to see work by Jerome Witkin, Domenic Cretara, Odd Nerdrum, Sigmund Abeles and others.
Posted by Frank Hobbs at 12:01 PM 1 comment:


For an earlier related post see: Genre Redux
Posted by Frank Hobbs at 11:55 PM No comments: